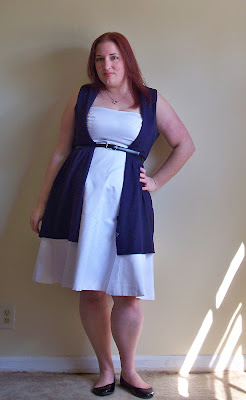 Today’s sponsor day is brought to you by Kacie of  Thimble & Cork.  She writes an amazing blog and makes even cooler garments!!  The theme she gave me was Love Conquers All.  She gave me this theme several weeks ago and I have been having quite the internal debate about what I should wear.  Originally I had planned on trying something different, but I just was not confident that was the way I should go.  So I decided to wear this dress.  You may be asking how this simple dress represents the theme.  Some of you may even know what this dress is and understand why I was so nervous to wear it.  I made this dress almost 6 years ago and never blogged about it because I wasn’t blogging then.
This is my wedding dress.
This dress was a work of love and is the best representation I can think of for love conquering all.  My internal debate consisted of me arguing that a wedding dress should only be worn once.  But in the end I decided that there was not really any other better way to represent love than by wearing the dress that I did when I said “I do”. 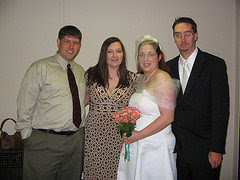 Eric and I eloped, sorta.  We had been engaged since my sophomore year in college, 2002.  We moved to Chicago after I graduated in 2006 and didn’t really have a lot of money.  So after being there for a year with no movement on the wedding front, and partly because Eric had awesome insurance benefits from working for an insurance company, we decided we should just go downtown to the court house.  We took our two best friends and roommates at the time and off we went.  It was a blast!  After the service we went to eat a delicious meal at Weber Grill and then went to the Museum of Science and Industry.  Funny thing happened at the museum,  there was a wedding going on there.